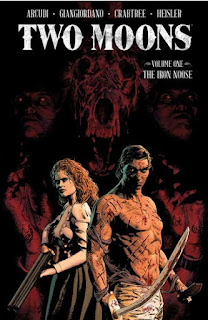 Two Moons TPB Vol 01 $16.99 Image Comics
RUMBLE and B.P.R.D. writer JOHN ARCUDI is back at Image with rising star VALERIO GIANGIORDANO for an all-new horror series set in the midst of the Civil War.
In the middle of the horrors of the American Civil War, young soldier Virgil Morris discovers that he can't leave his Pawnee origins behind him.
Visited by ghosts and visions, he learns that the war is not the worst evil he and his new friend, nurse Frances Shaw, face. Together - and apart - Frances and Virgil combat madness and hell itself.
Collects TWO MOONS #1-5.
Posted By nwcomicgames at 9:59 AM