The latest addition to the line of comic creators joining Substack Pro isn't a single person with a team supporting them - it's a team of long-time friends and collaborators, doing it together.

The Marvel Comics duo of writer Donny Cates and artist Ryan Stegman are continuing their collaboration past Venom, Absolute Carnage, and King In Black to launch their own creator-owned series called Vanish. 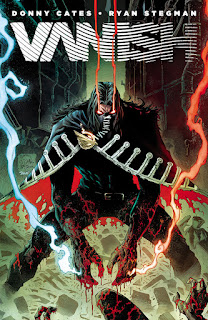 "Vanish is the big bad boy of our launch. Ryan and I's creator-owned follow-up to our King in Black saga," Cates tells soucres. "It's...insane. It's exactly the kind of book I've dreamt of doing for so long."

"It's my first creator-owned book so I'm extremely excited," Stegman adds. "We've been hard at work for quite some time building the world and designing characters. And, long story short, it's awesome."

But before we get to far into Vanish, their Substack won't be premiering just that comic book series, but two other creator-owned series that is part of their publishing imprint KLC Press. (KLC stands for 'Kids Love Chains', if you must know).

Two other Cates-written projects, Flood (with artist Megan Hutchison-Cates and colorist Dee Cunniffe) and The One You Feed (with artist Dylan Burnett), will be serialized on the KLC Press Substack Pro newsletter. Those two books were previously announced to be published by Image Comics, and Cates assures us that hasn't changed.

"Both will eventually be coming out through Image in print As will Vanish," Cates says. "Folks can get a whole lot more info on that front by smashing that subscribe button on KLC Press!!"

Posted By nwcomicgames at 10:48 AM